If you are frequently having a discussion with people all over the world through the Internet, whether it is for personal or professional reasons, you have certainly used or heard about Skype. But did you know that this company, valued at several billions of dollars, was of Estonian origin?

This could be surprising, considering the limited size of its market, but Estonia is one of the countries with the largest number of start-ups per capita. The question we can ask is “why”? Why such an interest in the business creation in this country?

Here we discover a part of the answer:

Before 1991, Estonia was part of the USSR which annexed the country at the beginning of the Second World War. But in 1991, after several years of aspirations and repression, the country regained its independence and became a parliamentary republic. In this period, Estonia, which is poor in terms of natural resources, sought a way to develop economically. While only half of the population had a private telephone line, the country focused on the internet revolution until establishing the first electronic citizenship.

Since then, Estonia joined the European Union and the euro area. Its economy is continuously growing, except in 2009 because of the subprime crisis (see chart below from the World Bank). In 2018, the growth was 3.9%. 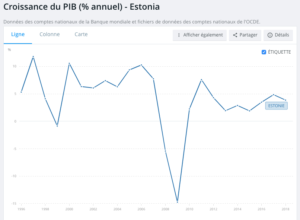 In 2018, Estonian imports and exports are increasing (respectively +9.7% and +12.1%). The main supplier countries are Finland, Germany, Russia and Lithuania. France is in 13th position (source: Le Moci).

With its 1.3 million inhabitants, the Estonian market remains limited in terms of size. That leads start-ups to rapidly internationalize their activities to target a broader audience.

Estonia is one of the world’s most advanced countries in the digital transition.

Its first action after the separation from the USSR was to develop its infrastructure networks and focus on education (The program of school digitalization was launched in 1997), thereby making the digital sector its strong point. There, banks never proposed to their clients to use checks, but they directly offered online services and 99.8% of the transactions are now electronic. And, in 1999, all the schools were already equipped with internet access. Lastly, since 2000, internet access is considered as a fundamental right and 99% of the country services are available online.

In Estonia, there is also the electronic citizenship. Thanks to a unique identifier, citizens can have access to all types of online procedures and services: health services, social security, bank accounts, passports etc. and electronic signatures are very common. 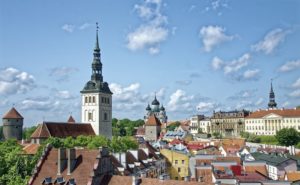 All-digital Estonia encourages the creation of new businesses. According to Thomas Padovani, AdCash’s founder, “it takes on average about 15 minutes to create its company in Estonia”. It is no more needed to spend hours filling out administrative documents.

The e-Resident status makes it even easier. Thanks to this, since 2014, people who do not live in Estonia but everywhere in the world can obtain an Estonian electronic citizenship and then create their company or have a bank account. This enables to remotely handle all the administrative formalities relating to its company: electronic signature of contracts, transmission of documents, banking operations, etc. More than 30,000 people from around the world have obtained this status.

Last but not least, the tax system in the country is also very simple. Start-ups have more time and means to grow: earnings are not subject to tax if they are reinvested into the company.

A high level of qualification

This all-digital nation was able to train its citizens on this subject. Since 2012, programming languages (code) are taught to students from the age of 7.

According to the last PISA ranking (Programme for International Student Assessment), which evaluates the education systems performances of OECD and non-OECD countries, Estonia is in the 3rd place, with a good score in science and mathematics.

There are now numerous qualified engineers and developers in this country. 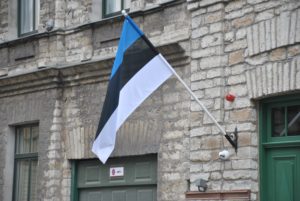 Estonia was the birthplace of many start-ups and companies. Some of them, on the model of Skype, have a wonderful success. And some have become unicorns, that means that they are valuated at more than a billion dollars.

Below are some ot them:

– To obtain the e-resident status and create his own business in Estonia: https://e-resident.gov.ee/

– In need of advice in the matter of strategy? Please consult our dedicated page.

– For more information on the protection of your inventions in Europe, please contact our teams or Brandon IP’s ones.