André Citroën, a pioneer of the car industry 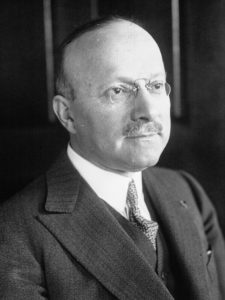 Born in Paris in 1878, André Gustave Citroën is the son of a Dutch diamond dealer who emigrated to France and a Polish mother, and the last child in a family of 5 children.

Interested in science and technology but also a good student, he entered the Ecole Polytechnique in 1898, seeking to prepare for a career in engineering or industry.

Following a visit to his Polish family in 1900, he offered to buy the license for a manufacturing process for herringbone gears. He improved the idea but had first to complete his education and do his military service before he can start production.

He later acquired his experience in the automotive sector by becoming general manager of the car manufacturer Mors.

He formed a partnership with Jacques Hinstin and André Boas to found “Citroën, Hinstin and Co.”, a company specialized in the manufacture of gears, with which he made a fortune. He filed numerous patents in various fields, including the automotive industry, and became President of the “Chambre Syndicale de l’Automobile et des Industries” (Automotive and Industries syndicate).

It was after the WWI, in 1919, that he founded the car company Citroën with the famous chevron logo which has changed very little since the brand exists.

He then never stopped focusing on finding the best way to serve its vehicle users by importing new European technologies and increase their reliability. Its creative ideas in customer services and communication have helped establish and strengthen the notoriety of the brand.

The Yellow Expedition is a typical example.

At the origin of the project

The Yellow Expedition is the third automobile rally organized by Citroën after having crossed the Sahara and the “Black Cruise” (both in Africa).

It was following the positive results in terms of media impact of the Black Cruise that he decided to follow the Silk Road by car, with the purpose of travelling 13,000km between Beirut and Beijing, crossing most of Asian countries. 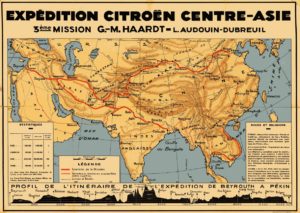 Several objectives were assigned to this mission: to demonstrate the technical qualities and the robustness of Citroën vehicles and their ability to go anywhere in the world, but also to open a new commercial road and gather meaningful scientific information about poorly known countries. That is why the expedition included film directors, archeologists, painters, writers and photographers.

In April 1931, after 3 years of technical preparation and diplomatic negotiations, two groups took the start, one from Beirut in Lebanon (Pamir Group) and one from Tianjin, in China, with the objective of meeting up in Xinjiang (near the Gobi Desert) before returning to Beijing.

A path full of pitfalls

Most of the trip being done on rough tracks, across the deserts and mountains, and the crew comprising no less than 40 people, it was decided to use heavy vehicles which can be easily disassembled and reassembled by hand: half-tracks. 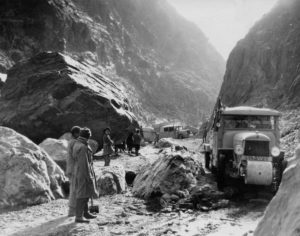 Pamir Group immediately experienced difficulties. The heat can reach 50° in the Persian Gulf countries, causing the evaporation of fuel and reducing the power of the vehicles.

The relief is another important difficulty. Crossing the Burzil Pass in the Himalayas, above 4,000m, is a real challenge for the crew. Only 2 half-tracks made the crossing.

With a snowy mountain pass and frozen rivers, vehicles were not travelling much faster than 1km / h. Once this obstacle is cleared, another difficulty appeared: as a result of a landslide in the mountain, the path had disappeared and had to be retraced. There was no option but to disassemble the half-tracks to make 30-kg packages, transportable by mules. Vehicles could thus be reassembled once the obstacle had been overcome to continue the journey.

The group that left China, for its part, experienced very different difficulties, such as a sandstorm, or the explosion of a gas tank that forced them to search for fuel, slowing their progress. And, on top of that, the team was taken prisoner soon after by Marshal King, the local governor. It is the Pamir Group that negotiated their release while a civil war devastated the country.

Despite the difficulties encountered and the death of the expedition leader Georges-Marie Haardt from pneumonia, which occurred shortly after the arrival in Beijing, the overall result is positive.

Many images have been brought from this trip as well as films with sound recordings, a formidable technical feat for the period. A movie on the subject was released in 1934 and meet a great success in France and in the United States.

This expedition is still considered today as one of the greatest automobile achievements of the 20th century and a great human adventure.

To know more, here is a radiovision redrawing the event (in French):