To this day, one-fifth of the global energy comes from renewable sources. In 2016, there were 160GW from facilities dedicated to renewable energies in the world. It is 10% more than in 2015, with a 25% lower cost! This increase comes first from new solar technologies, which bring about half of the additional capacity, followed by wind energy (with a 15% contribution).

As a result of the COP 21, many countries have set their goals high in terms of renewable energy for the next 10 to 15 years. Leading countries in this sector are China and India, which are aware of serious pollution problems in their cities. The United States withdrawal from the Paris Agreement does not prevent us expecting significant progress in the coming years, like some major states in the U.S. [1]

This business sector is experiencing an acceleration of innovation. This resulted in 2017 in an 10% increase of the number of patent applications in the world on these topics, according to EMW. Indeed, patent applications rose from 10,500 in 2016 to 14,800 in 2017.

China is reported to account for more than 76% of the deposits (11,295 applications). The U.S., in second place, deposited about 10 times less patents (1,534). The first European country on this classification is Great-Britain, ranked 7th worldwide, with 44 patent applications. This figure, though, is low.

EMW also indicated that the majority of the applications relates to solar energy (56%). [2]

Lastly, the renewable energies sector employs 10.3 million people worldwide, according to a counting of the International Renewable Energy Agency. 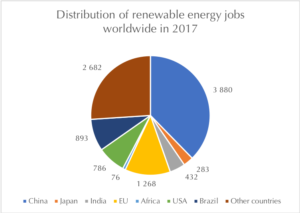 China appears to be the primary beneficiary of this market, followed by the European Union (of which 25% of the jobs are in Germany and 8% in France). Unsurprisingly, Africa is the poor cousin of this sector.