You may have already been informed of this event given the communication relating to this subject since the beginning of the year.

At the same time of being an artist, Leonardo da Vinci was a great inventor and a visionary of his time. So, why not just pay a tribute to him since we share the same taste for discovery?

Son of Ser Piero, notary of the seignory of Florence, and a farmer’s daughter, Leonardo di Ser Piero da Vinci was born in Vinci, near Florence, Italy, in 1452 and died in the Manoir du Cloux (today Clos-Lucé Castle), in Amboise, France, in 1519.

His life and beginnings in Florence 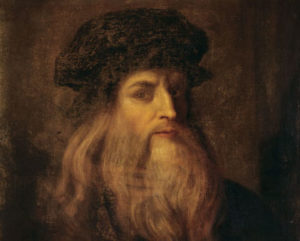 In 1469, Leonardo da Vinci worked in Verrochio’s workshop and learnt there the basics of painting and sculpture, including perspective (Annunciation, 1473, Ginerva de’ Benci, 1478-1480).

He learned a technique called “sfumato”, a sort of veil that dilute plastic masses in a more suggestive and poetic reality. This technique makes imperceptible the transition between colors, shadows and lights (Adoration of the Magi, around 1481, unfinished).

To take part in the dissemination of the Florentine know-how, at the request of Lorenzo de Medici, he moved to Milan in 1482 where he served as a military engineer, an architect, a painter, a sculptor and he also organized celebrations in the Sforza’s court.

He worked for 16 years on the equestrian statue of Francesco Sforza, a huge work that was never melted. He also participated in the discussion about the construction of Milan’s and Pavie’s Cathedrals and painted two pictures: Virgin of the Rocks, around 1482-1483, and The Last Supper, 1497.

In 1499, the Duchy of Milan fall into the hands of the French and Leonardo da Vinci left for Mantova where he made the portrait of Isabelle d’Este. In Rome, he worked as a military engineer for Cesar Borgia, then he returned to Florence. 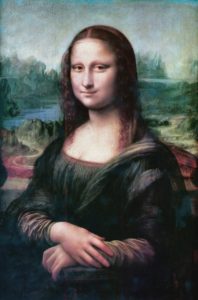 In 1508, he came back to Milan where Bernardino Luini and Andrea Solario will become his disciples. He then made an equestrian monument for the Condottiere Trivulce’s tomb (1511-1512). Later, he spent two years in Rome where he is called by Giuliano de Medici. From this period remains the Saint John the Baptist from the Louvre (around 1514-1515). Finally, in 1516, he responded to the offer of François 1st, who invited him to his royal court and settled him in Manoir du Cloux (now Clos-Lucé Castle), near Amboise Castle. There, he will draw the plans of a perfect castle for the King of France. François 1st himself confided that he did not believe that “a man had so much knowledge”.

Scientist and engineer: the passion of knowledge 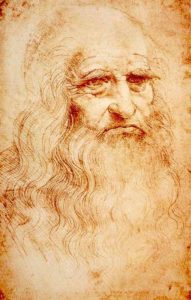 This solitary master of innovation, stoic and serene, refused the authority and based his judgment on experience.

He is not a scientist bringing revolution in science with his discoveries and hypotheses, like Copernic or Newton. While celebrating “the supreme certainty of the mathematics”, he is above all a “visual person” for whom the eye, “window of the soul, is the main route by which our intellect can appreciate the infinite work of nature”. His curiosity refuses all distinctions between pure science and applied science, between fine arts and mechanical arts.

His research focused on various fields as astronomy and geology, geometry and the mechanics, optic and acoustic, botanic and metallurgy. But three main fields stand out from its notebooks due to the abundance and singularity of his notes. 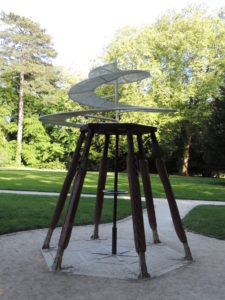 In the continuity of all aspirations of this century, Leonardo da Vinci did complete, in painting, his chiaroscuro’s work, of which the impact was so decisive. Author of only 18 completed paintings, he left behind a heritage of an immense value.

It is completed with theorical writings, published in French in 1942 and untitled “Carnets de Léonard de Vinci” (Leonardo da Vinci’s notebooks). They include the Treatise on Painting, conceived in 1490 and published in 1651.

“In time of peace, I can equal, I think, anyone in architecture, erect private and public buildings, and conduct water from one place to another” – In a letter addressed to the Duke of Milan, Ludovic Sforza le More.

“Painter, do not decline your colors in the perspective more than the figures that wear these colors” – A Treatise on Painting

“The divine nature of painting makes the spirit of the painter turn into an image of God’s Spirit.” – A Treatise on Painting 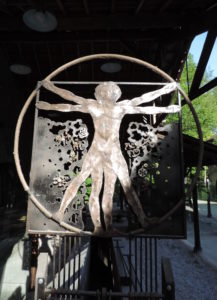