Today, Brandon presents the life of Margaret Hamilton, an American computer scientist and engineer who has long remained unknown to the general public but has emerged from the shadows for some years now. She is today recognized for her considerable contributions to space research projects within MIT (Massachussets Institute of Technology) and NASA.

A passion for mathematics

Margaret Hamilton was born in 1936 in the United States. As she grew, she quickly developed a passion for mathematics and decided to work in this domain. In Wired magazine, she said in 2015 “I enjoyed school, but there was something about maths that I loved more than anything”. And it was at the age of 22 that she graduated from Earlham College in Indiana with her Bachelor of Arts degree in mathematics. 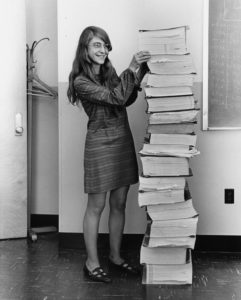 Two years later, in 1960, she chose to join MIT as a programmer. Her first role was to develop computer programs for weather forecasting.

She began to work in 1961 on the military project SAGE, a computer system for missile defense.

Her excellent skills and her ability to operate a “tricked” program that no one had succeeded to make work before led her to the NASA. She then joined the Draper laboratory at MIT, responsible for developing the Apollo program software.

The Moon as a goal

It is said that she was so passionate about her work that she did not count her hours. She often brought her daughter to the office, who sometimes played around with her simulations (which was apparently very useful to solve a problem on Apollo 8!). 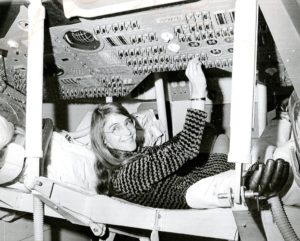 The mathematician worked in particular on a program for the prioritization of tasks, while at that time the software always processed the tasks one after another, which could become problematic in the event of an incident.

It was this program that was installed on Apollo 11 and played a crucial role on July 21, 1969.

Indeed, just before the landing, alarms were triggered inside the module: the system was overloaded and could no longer process data at the most critical moment. Thanks to this software designed by Margaret Hamilton, the system rebooted. Priority tasks relative to the Moon landing were then taken prior to less important tasks and the maneuver finally went off without any other incident.

Without this software, the result might have been quite different and, above all, the “giant leap for mankind” might not have been dated to 1969.

She said about her work at that time: “There was no choice but to be pioneers”. 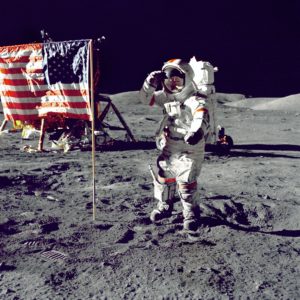 In 1986, she founded Hamilton Technologies and developed a new programming language, the USL (Universal Systems Language), for software and complex systems development. She won that year an award from the Association for Women in Computing.

Margaret Hamilton’s work was recognized years later at the highest level, when NASA in 2003 presented her with an Exceptional Space Act Award for all of her scientific contributions to the space program. She then received $ 37,200, the largest amount ever given to a person in the history of NASA. Since then, Margaret Hamilton has won other awards, including the Presidential Medal of Freedom, awarded in 2016 by President Obama and which represents the highest civilian honor in the United States.

Google and LEGO companies have also paid tribute to her: LEGO has designed a figurine of her, and Google had his portrait reflected in mirrors under the light of the Moon for the 50 years of the Apollo 11 Moon landing in 2019.

Google, “A moonlit tribute to a moon landing icon”: see the tribute here.

They are very nice rewards, for an exceptional woman who deserves to be better known.

To know more about the work of Margaret Hamilton for Apollo 11:

Finally, we could not talk about Margaret Hamilton and her contribution to space research without mentioning other women who, around the same time, also made significant contributions to space programs, despite gender and racial barriers. They are several, and among them we can reference Mary Jackson, Dorothy Vaughan and Katherine Johnson, all three great scientists and (eventually!) heroines of the beautiful movie “Hidden Figures”, released in 2017, which we recommend to you.

This is a good opportunity to remind that the first woman in space was the Soviet Valentina Terechkova (in 1963), whereas no woman was ever a member of a crew that landed on the Moon.