In a more and more alarming context about climate change and preservation of the planet for future generations, the methanization is increasingly becoming a relevant solution for both waste management and renewable energy production. Although promising, the methanization does not enjoy unanimous support.

Then, what is methanization? Why is this process booming? What are the arguments of the detractors of methanization? Many questions are answered by Brandon Valorisation in this article.

The methanization, or aerobic digestion, is a natural, biological process by which the fermentation and degradation of organic wastes will lead to the combined production of a biogas and a digestate.

Organic wastes need to be fresh. It can be composed of agricultural residues (muck, manure, crop residues…), by-products from the food and beverage sector, grass cuttings, domestic biowaste (food leftovers, fruit and vegetable peels), wastes from catering or retail sectors, or even sewage sludges).

To make the methanization happen, these wastes are stored in a digester, a hermetically sealed equipment in which they are deprived of oxygen. Then bacteria, naturally present or added in these wastes, will grow and produce biogas, a mixture of gases with a significant proportion of methane.

This biogas can then be used in three ways:

Another residue arises from this process: the digestate. It amounts to between 70% and 90% of total weight introduced in the digester and could be used as a natural fertilizer by farmers in their fields.

The methanization is a very common process in the natural environment. This phenomenon is supposed to have been highlighted by Alessandro Volta in the 18th century, which, when walking, would have observed some gas escaping from a swamp. And it is in the early 20th century that the first facility for the production of biogas began its operation in Great Britain for lighting the streets of London.

What are the benefits of the methanization?

There are several advantages associated with the methanization.

Firstly, this natural process enables farmers to treat the wastes generated in their farms. These organic wastes, when decomposing, naturally produce methane, a greenhouse gas far more powerful than carbon dioxide. Thanks to the methanization process, this gas is valorized and does not go up into the atmosphere any more. It is therefore a real benefit in the fight against global warming.

Also, the heat generated in the same time is not lost. It can be used as an alternative source of heat for surrounding buildings, reducing energy costs in natural gas from fossil sources or in electric heating.

Finally, in addition to the green energy creation (biomethane), this process produces the digestate, which is used to fertilize crops. The digestate replaces synthetic fertilizers and gives off less odors than untreated manures.

In an economic level, methanization has several advantages. It might be a local solution for revitalizing employment. But the main advantage is for farmers. Indeed, this process brings them additional revenues while some farm operations are struggling in difficult context. The methanization enables them to diversify their activities and maintain employment. 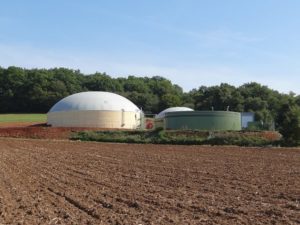 Like every new growing sector, concerns arise from inhabitants and collectivities.

The anaerobic digester is hermetically sealed, so the odors generated during the fermentation should not disturb the residents. However, there may be biogas leakages and this mixture has a strong smell due to the presence of ammonia and hydrogen sulfide.

The main concern is about the digestate and the pollution that its land application might cause (drinking water pollution by infiltration, impact on the biodiversity…). The digestate is made from organic wastes that can contain nitrates, bacteria, pesticides or even drug residues.

These concerns are primarily due to the relative lack of public knowledge and are partially responsible for the long administrative delays in France (between 2 and sometimes more than 4 years).

If the methanization sector is well developed in some countries like Germany, it experiences a slow growth in France.

New young companies enter the methanization market, including Tryon, a French start-up, which offers methanization units for urban districts in small containers. These local units, thanks to their size, can indeed be installed near private homes and SMEs. The society recently received an innovation award from Paris Ouest La Défense territory.

In order to accelerate the growth of biogas in France, the innovation platform CertiMétha is expected in 2019.

Lastly, some partnerships are signed in order to invest in methanization. It is for example the case in the Ardennes where the Pacte Ardennes aims to finance 27 actions at 12 million euros. Also, in 2019, the Ile-de-France region and ADEME Regional Office launched a third unified call for projects to develop methanization. And the Ministry of Agriculture has launched, with the Public Investment Bank, a non-guaranteed loan offer for 400 new methanization projects.

To learn more about the methanization, see the video (in French) “La méthanisation, un enjeu d’avenir” (The methanation, a challenge for the future), produced by the Nord-Pas-de-Calais Chamber of Agriculture.